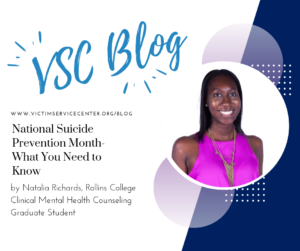 However, suicide is preventable. Knowing the risk factors of suicide and recognizing the warning signs can help prevent suicide.

What is Suicide Prevention?

Suicide Prevention is reducing the risk of suicide; it involves the collective efforts of local or state run organizations, health and mental health professionals whose goal is to reduce the incidence of suicide.

Suicide is the act of ending your own life, by directing violence on yourself. When someone ends their own life, we say that they “died by suicide” or “completed suicide.” It is best to avoid the use of terms “committed suicide” or “successful suicide” because it adds a negative connotation.

A “suicide attempt” means that someone directed violence on themselves but did not die.

Risk Factors are characteristics that make it more likely that an individual will consider, attempt or die by suicide.

Those who may struggle with Suicide:

Five action steps for communicating with someone who may be suicidal:

Ask – Don’t be afraid to ask questions, including “Are you thinking about suicide?” It shows that you are open to communicating about a subject that many choose not to speak about. Remember you should do so in a non-judgmental and supportive way. But also don’t forget to listen. By listening, you will be able to see what the best course of action is, whether calling a helpline, 911, taking them to an emergency room or even a behavioral hospital. Be sure to take all answers seriously and do not ignore them!

Keep Them Safe – After you “Ask” and have determined suicide is being talked about, it’s important to establish immediate safety. So how do you do establish safety? Find out if the person has attempted suicide before, if they have a specific or detailed plan on how they would die by suicide? If there is a timeframe? If there is a method that they’d want to use and/or if they have access to obtain this method?

Be There – Can mean a few things, physically being present, speaking to them on the phone when you can, providing resources or showing support in any way they may need.

Help Them Connect – Helping someone with thoughts of suicide connect with ongoing support can help them establish a safety net for those moments they find themselves in a crisis and are in need of professional help.

Follow Up – Be sure to follow up with them to see how they’re doing.  Don’t be afraid to check in to see by calling or texting, this is a great way to continue to show support and offer them assistance.